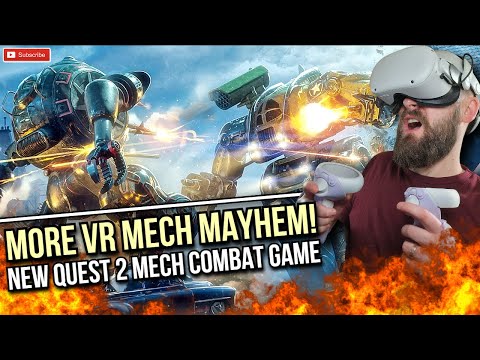 We already have quite a few VR mech games for the Quest 2 platform (Vox Machinae & Iron Rebellion come to mind) but soon there will be another new Quest 2 game fighting for your attention in this genre, World of Mechs VR! World of Mechs VR is an upcoming VR game that takes a much more arcadey approach to the VR mech combat genre, rather than being able to interact with all the dials and buttons in your cockpit you’re instead locked in to the joysticks (which look just like Quest 2 controllers) and your one and only focus is fast, frenetic mech battles against either bots or human opponents online. With tonnes of unlockable content from new mechs to decals & upgrades for weapons & overall stats theres plenty of incentive to keep returning to purchase better gear BUT is the core gameplay loop enough fun & are the modes varied enough to keep you engaged…

For me personally World of Mechs VR offered a fun slice of frantic gameplay but felt hollow when compared to something like Vox Machinae which allowed me full control over everything in the cokcpit of the mechs I was piloting. Physically grabbing the controls, toggling weapon modes, pulling levers & dials, these small details help to immerse you in these digital worlds but World of Mechs opts instead to lock you to your joysticks & play without any real level of VR interactivity. The campaign is also a little shallow, effectively just the bot matches with some dialogue over the top to give context instead of a real story driven mode that allows you to traverse through unique levels & environments. I’m yet to try the online multiplayer as at the time of writing I struggled to find a game & could not connect to friends when I attempted to. When you’re a new VR game / new Quest 2 game competing in a market that already has a few solid titles which are very similar to your own you really need to do something unique to stand out & in it’s current state World of Mechs VR, although a fun little title, doesn’t quite do enough to pull my away from Vox…

If you want to stay up to date with all the new VR games / new Quest 2 games and new VR mods that 2022 (and beyond) throw at us, then don’t forget to subscribe, I put out 3-5 VR gameplay videos weekly and stream once a week on average. You can also follow me on Twitter @BeardoBenjoYT

10 Video Games Everyone Wanted (But Hated)

Minecraft but Among Us Custom Hearts

10 Video Games Everyone Wanted (But Hated)

Minecraft but Among Us Custom Hearts