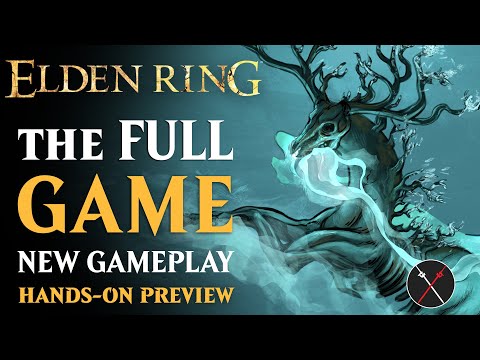 The eagerly awaited Elden Ring is getting new gameplay from a special hands-on session that we were incredibly lucky to participate in. https://fextralife.com/elden-ring-new-gameplay-full-game-hands-on-preview We were allowed to explore the first hours of the Full Game, giving us a clear idea of what to expect with the full release. The hands-on session didn’t allow capture, but all participants were given associated footage to use and distribute. This footage should be new and separate from the previous b-roll published at the start of the month, so watch on to catch all the new reveals!

Some Footage via Gameinformer https://www.youtube.com/watch?v=0GZdBPXuLR4

Spoiler Free Summary:
Everyone could play the game for a limited amount of hours, and without leaving some specific boundaries.
We were allowed to explore lots of areas beyond what was in the network test: so we could see all of Limgrave, the island to the south of it, the expanding plains to the East and the previously inaccessible northern area of the map that was shown in official trailers.
Items and NPCs are not necessarily where they were during the Network Test, that had crammed a lot of tools for players to try out into one small area.
An entirely new map was revealed
The game’s hub and many NPCs were revealed
The game seems to have a lot more quests than previous games, and they are accessed earlier on
There seem to be a lot more NPCs to find and interact with than you would expect from a souls title
Each location had a theme that matched the overall world but with its unique characteristics
The enemy design varied greatly from some areas to others, and there are plenty of creatures and monsters, all with their own movesets.
There is a fantastic amount of mini-boss type enemies, with really varied designs, movesets and even music.
We found +12 weapon upgrades and what seemed to be the equivalent of twinkling titanite
You may be able to craft “Faux Spells” that are either consumables or buffs
The game has so many secrets and discoverables that you will be spending a lot of time just figuring them out
Exploration is key and the world is designed around subtle but effective hints to guide you along without holding your hand
Combat and feel are extremely souls-like
Many dungeons feel like you’re playing Souls but with a completely new set of tools at your disposal

When I first played Elden Ring during the network test, I thought it would be less souls and more about traversing large landscapes and popping into dungeons. 50 hours into the demo I thought I knew the game’s tempo and knew how the whole game would turn out.

My first hours with the full game have taught me otherwise: this is a game that will shatter your expectations and you can’t even imagine the actual scale and depth of it. Every time you think you have it figured out some new thing pops around the corner to surprise you.

Elden Ring is poised to be a generation-defining game by combining FromSoftware’s creative ingenuity with tried and true Souls concepts, taking the excellent combat of the series and giving it incredible room to grow in this expansive and fantastical world that is a pleasure to explore.

Elden Ring – How to open the locked door in Impaler's Catacombs