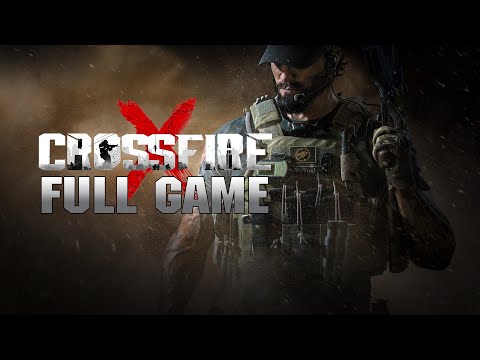 CrossfireX is a first-person shooter video game released exclusively for the Xbox One and Xbox Series X/S on February 10, 2022. It is the third installment in the CrossFire series. Remedy Entertainment worked on the game’s single-player campaign, while Smilegate Entertainment led the development of the game’s free-to-play multiplayer portion.

CrossfireX is a first-person shooter and the console version of CrossFire (2007). The free-to-play multiplayer component is similar to Counter-Strike: Global Offensive, which sees two opposing teams, representing two hostile private military factions, compete in game modes to complete objectives. Classic mode sees the attacking team attempting to plant a bomb while the defending team has to stop them. All players are equipped with standard weapons. The Spectre mode is a variation of the classic mode, though the attacking players are spectres, who are only equipped with knives but they can stay invisible when they are not moving. There is also a Modern mode, in which the two teams need to fight for maintaining control over two objective points in a map.

The single-player portion, which would not be free-to-play, consists of several operations. Each operation includes several episodes. At launch, there would be two operations available. The story explores a global conflict between Black List and Global Risk, two private military factions.

I used an ancient Rust Base Design to become UNRAIDABLE…

10 MOST DIFFICULT Games For NEW PLAYERS

I used an ancient Rust Base Design to become UNRAIDABLE…

10 MOST DIFFICULT Games For NEW PLAYERS

CrossfireX Review – A Misstep At Almost Every Turn

CrossfireX: Why You Should Play The Biggest FPS In The World