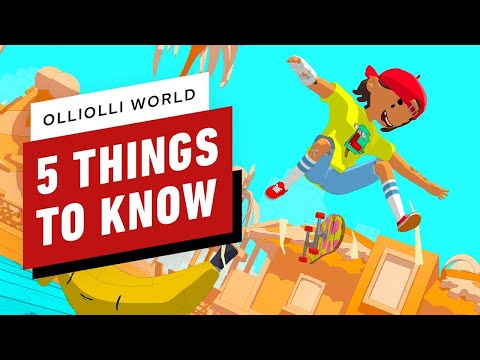 OlliOlli World is the latest skateboarding platformer from developer Roll 7, where players try out to become the next Skate Wizard of Radalandia. From mystical skate gods to the crazy level of customisation, here are 5 things to know about OlliOlli World. Sponsored by Private Division.

OlliOlli World sees your skater try out to be the next skate wizard of Radlandia, whose job is to keep the balance between the skate gods in gnarvana and the skaters down in Radlandia. You will learn all the tricks in OlliOlli World through tutorials given to you by your group of friends, Gnarly Mike, Suze, Chiffon and Dad. Skaters start off in Sunshine Valley before moving on to Cloverbrook, Burnt Rock, Los Vulgas and Sketchside.

In Gnarvana players can compete against other skaters in the two asynchronous multiplayer modes, Gnarvana League and Gnarvana Portal. Gnarvana League pits you against other players in a competition to see who can get the highest score. Score enough points and you’ll rise through the ranks ⁠and eventually unlock new character items. Gnarvana Portal is where skaters can generate original tracks by altering the style, difficulty and length, then share them with friends on any platform using the unique postcode so they can compete against each other to rack up the best score.

Developed by Roll 7, OlliOlli World is out on 8th February 2021 on Xbox Series X and S, Xbox One, PS4, PS5, PC and Nintendo Switch.

Blackguard Boggart’s Stealing Days Are Over!

8 CORE Differences in Flyff Universe You Should Be Aware of!

Blackguard Boggart’s Stealing Days Are Over!

8 CORE Differences in Flyff Universe You Should Be Aware of!